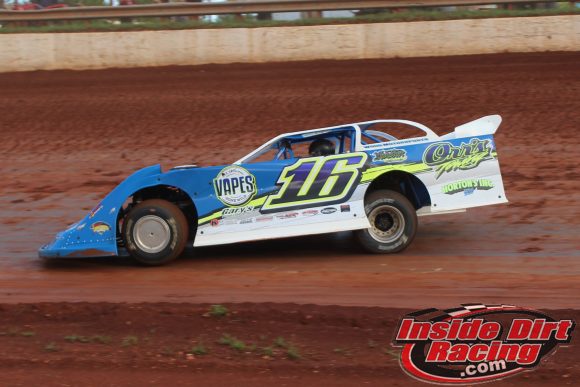 Austin Horton will start the National 100 from the pole

One of the South’s most historic Dirt Late Model events got underway on Saturday night with qualifying and heat races for the unsanctioned 47th annual National 100 at the East Alabama Motor Speedway. After the preliminary action was completed at the Phenix City, Alabama facility it was determined that Austin Horton and Brandon Overton will start the $20,000-to-win feature from the front row when the main event takes the green flag on Sunday.

Mark Whitener was fastest in Group A qualifying with a lap of 14.686 seconds around the 3/8 mile clay oval to beat out Ray Cook, Dennis Erb Jr. and Joey Armistead.

Austin Horton was quickest in Group B time-trials and overall with an effort of 14.538 seconds topping Joseph Joiner, JR Moseley and Kenny Collins.

Mark Whitener took the third and final heart of the night ahead of Dennis Erb Jr., Ray Cook and Sam Seawright.

B-main racing action will take place on Sunday to set the remainder of the field.