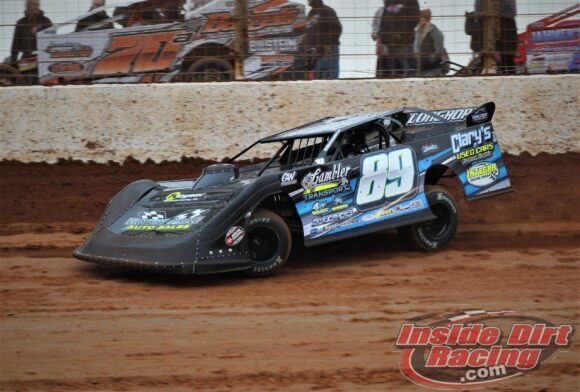 The biggest race weekend in the history of Southern Raceway got underway on Friday night with the ‘King of the Sandbox’ event. The first of the two-night affair at the Milton, Florida facility featured an unsanctioned Super Late Model event. At the end of the night, it was Ashton Winger who claimed the victory. The Longhorn Chassis driver from Hampton, Georgia earned $5,000 for his efforts in a race aired live by FloRacing.com.

The second night of competition will pay out $20,000 to the Super Late Model victor.

A total of 15 cars were signed in for competition on Friday night.

G.R. Smith was fastest in Group A qualifying with a lap of 14.413 seconds around the 3/8 mile clay oval to beat out Ryan Crane, Joseph Joiner, Robbie Stuart and Payton Freeman.

Ashton Winger earned the pole position for the feature when he grabbed the win in the first heat race ahead of Brandon Overton, Max Blair and Josh Putnam.

G.R. Smith would start the main event from the outside of the front row as a result of his win in the second heat ahead of Ryan Crane, Joseph Joiner and Robbie Stuart.

When the green flag waved over the 30-lap feature it was Winger who grabbed the early lead with Smith, Overton, Blair and Joiner in his tire tracks. A lap 2 caution for a spin involving Crane slowed the action. On the ensuing restart, Putnam got by Joiner for fifth.

A multi-car incident involving Joiner, Chad Thrash and others as the fought for position brought out another yellow flag on the third lap. Blair went to third behind Winger and Smith on the restart pushing Overton back to fourth.

Joiner slowed with a flat left rear tire on lap 5 once again causing a caution period. Drivers fell into single-file formation around the bottom of the track as the feature approached the halfway point as Winger continued to lead Smith, Blair, Overton and Putnam.

As the laps clicked away, Winger assumed full command as he built his lead to more than three seconds with 10 laps remaining. Winger would face challenges as the race neared its conclusion when he found himself among slower traffic. But in the end, Winger made his way through the potential pitfalls to score the win.