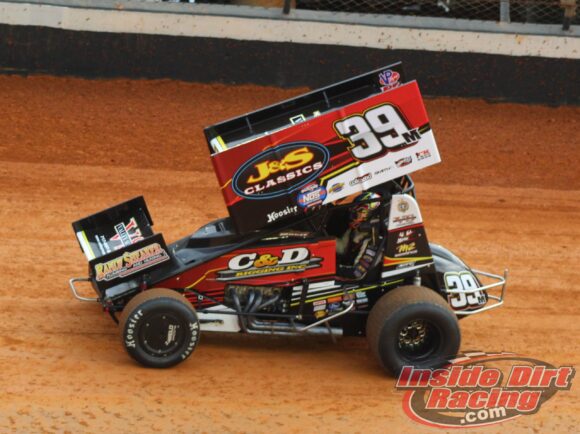 PORT ROYAL, PA – October 7, 2022 – After five years of trying, Anthony Macri can finally breathe a sigh of relief – he did it, he’s a World of Outlaws NOS Energy Drink Sprint Car Series winner.

Before his latest accomplishment, the 23-year-old was already considered one of the most respected racers in the country. He’s a Tuscarora 50 champion, an 11-time winner with the All Star Circuit of Champions, and the winningest Sprint Car driver this year, however, a victory against The Greatest Show on Dirt had always eluded him.

That is no longer the case, though. “The Concrete Kid” dominated all 25 laps at Port Royal Speedway on Friday night, running away from the likes of 10-time World of Outlaws champion Donny Schatz and PA Posse legend Lance Dewease to earn a long-awaited and much-appreciated first career win with the Series.

Along the way, the Dillsburg, PA native led a 1-2-3-4 finish for the PA Posse with Lance Dewease, Logan Wagner, and Justin Whittall following the #39M to the line. It’s his 20th career 410 Sprint Car win at “The Speed Palace,” tying Junior Ritchey for 15th on the track’s All-Time Win List.

“It seems like Ryan [Hand] and I have hit on something here,” Macri said on his dominant race car. “We tried something in Hot Laps and Qualifying, but it wasn’t what we wanted and we switched back to our regular stuff and it felt stout from there. I just knew that I needed to keep my head on my shoulders for 25 laps and not do anything stupid tonight. I’m so glad it paid off.”

Macri was never challenged through the opening half as he built a 3+ second lead through lap traffic, but the only caution of the race on Lap 16 changed all that. Restarting with nine laps left and 121-time Port Royal winner, Lance Dewease, hot on his heels, the kid knew he would have his hands full.

“I really, really didn’t want to see that caution,” Macri mentioned on seeing the #69K in second. “Knowing Lance [Dewease] was in second definitely got into my head a bit. I wasn’t sure what to do on that restart, but thankfully it worked out. He slid me that one point but I already decided there was no way I was lifting for this one. Once I realized the car was better on the bottom I felt more comfortable in the final few laps.”

Fending off two attempts for the lead from Dewease, Macri held on to become the 148th different winner in World of Outlaws NOS Energy Drink Sprint Car Series history.

Falling short of back-to-back World of Outlaws wins, 57-year-old Lance Dewease, of Fayetteville, PA, settled for runner-up honors aboard the Kreitz Racing #69K. It’s the second-straight year that Dewease finished a close P2 on the opening night of the Nittany Showdown.

“Anthony [Macri] is really good around this place and what makes him dangerous is he can run the bottom now,” Dewease joked. “I had a lane through the middle of turns one and two where I could get runs at him, but I was no good in turns three and four. I actually thought I had him passed that one time, but there is nobody better at running the wall than him and he drove right around us. It’s a neat deal to race with him considering the age difference. I’m not upset with second tonight.”

Rounding out the podium and completing a PA Posse sweep of the top-three was Logan Wagner, of Harrisonville, PA. The newly-crowned five-time track champion of Port Royal capped his night with a career-best effort, landing his first World of Outlaws podium finish in the Zemco Racing #1.

“Could’ve, should’ve, would’ve,” Wagner noted on the Dash draw impacting his run. “More importantly, we got that PA Posse podium sweep tonight. I’m sure our fans are proud of that. This whole deal is a group effort and I can’t say thanks enough to the people who make this happen. I hope we can find a little something and come back stronger tomorrow.”

Extending the Posse’s reign to make it a 1-2-3-4 finish was Justin Whittall, of Southampton, NJ, who primarily races in Central Pennsylvania all year. The 21-year-old landed on the front row and outlasted every full-time Outlaw in only his eighth Series start aboard the #67.

David Gravel, who finished fifth, trimmed down Brad Sweet’s championship lead to 74-points with seven races remaining. The Watertown, CT native will get another chance to cut into that margin in Saturday’s finale at Port Royal as he continues to chase his first World of Outlaws championship in the Big Game Motorsports #2.

Closing out the top-10 on Friday was Donny Schatz in sixth, Spencer Bayston in seventh, Sye Lynch with a career-best eighth, Ryan Smith earned his first top-10 since 2019 running ninth, and Carson Macedo ran 10th to make it back-to-back top-10s at Port Royal, where the Jason Johnson Racing #41 previously struggled.

Anthony Macri’s victory makes him the 148th different winner in the 45-year history of the World of Outlaws NOS Energy Drink Sprint Car Series. He joins Buddy Kofoid as the second first-time winner in 2022, bringing the Series to 17 different winners this season.

UP NEXT (Sat) – The World of Outlaws NOS Energy Drink Sprint Car Series will be back at Port Royal Speedway in Port Royal, PA tomorrow, Saturday, October 8, for the $15,000-to-win finale of the Nittany Showdown. Please be sure to make note of an early start time to the Outlaws vs. Posse battle with Hot Laps scheduled to go green at 5pm due to colder temperatures. Fans can BUY TICKETS HERE, or watch every lap LIVE on DIRTVision.