Home Blogs A month to forget. How bad weather has dampened new season

A month to forget. How bad weather has dampened new season

Here it is, the second full week of April. Normally, race teams and fans would be getting into their routine of heading to their respective racetracks each week. But this year has been unlike many in the past.

There hasn’t been much racing in the east Tennessee area. What little there has been took place in February. Most other races have been wiped out by bad weather. One wave of rain and cold weather has been followed by another, and another. Even those that care nothing about racing are over what seems to be a winter that will never end.

In order to understand how drastic this has been, let’s take a look at some of the numbers.

Most tracks in the area have yet to hold their first race. Some of that is skewed a bit as some did not have anything scheduled until this past weekend. Crossville, Wartburg, Smoky Mountain, and I-75 have not held one race this season. Of those four, only Smoky Mountain had anything scheduled prior to this past weekend. 411 Motor Speedway has held no races in the 2018 calendar year to date. Their Hangover event is part of the 2018 schedule, but was held on December 30 to get a jump on…bad weather.

Boyd’s Speedway (though technically in Georgia) has held one event in March, their Lucas Oil Late Model Dirt Series race. Despite cool temperatures, they took the gamble and decided to race. Judging from the crowd in the stands and in the pits, the gamble paid off.

Tazewell Speedway managed to get in their Charles Trammell Memorial race, even though it was delayed a week by weather. 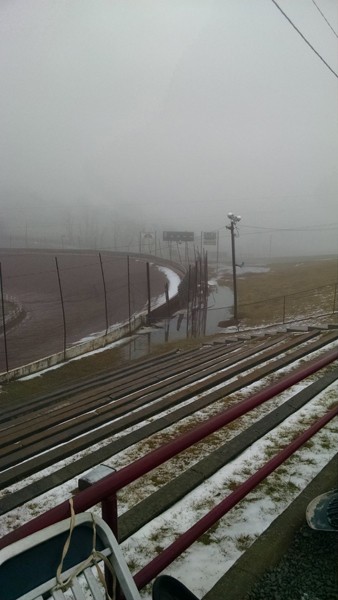 Volunteer Speedway is the only area track to get in two races in the month of March. But, their LOLMDS race scheduled for the night before Boyd’s LOLMDS race was wiped out because of heavy rains and cold temperatures the night prior to the race.

The bad weather affecting racing is not just isolated to east Tennessee. Lucas has cancelled or rescheduled four dates. The World of Outlaws Craftsman Late Model Series has not raced since Speedweeks concluded at Volusia in late February. They have also lost four races, two of which were scheduled at Smoky Mountain and rescheduled for late April.

In looking over the schedules, over 80% of races scheduled for March and the first weekend of April have been cancelled or postponed because of weather.

If there is one positive, the weather will eventually turn clearer and warmer. The races that have been postponed will be thrown into the mix of already scheduled for races. That will make for some really busy times ahead once good weather comes our way. The Spring Nationals will now end their 2018 campaign with five straight races, assuming none are rained out.

Everyone should be well rested for the busy race season ahead, once the weather allows it to take place.