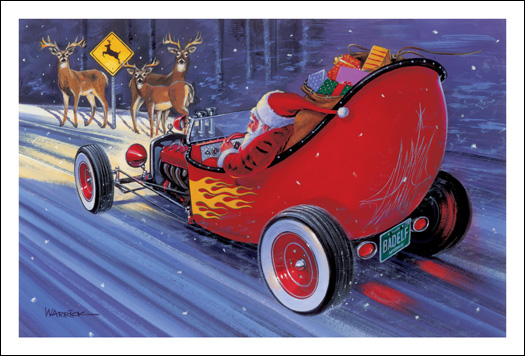 The Christmas season is upon us which means it’s almost time for Santa to load up his sleigh and head out for his yearly round of deliveries. Everyone knows that old Kris Kringle delivers toys worldwide to all the good boys and girls. But what may not be as well known is that the most generous dirt racing fan of all also fulfills the wish lists of the dirt racing world.

That being said, here are a few racing-related things I would love to find in my stocking on Christmas morning:

No more talk about the droop rule– I am not mechanical enough to even pretend to know what the droop rule does or doesn’t do in terms of safety and competition. As far as I am concerned, each series can either have or not have the droop rule, it really doesn’t matter to me. My Christmas wish is that people, especially non competitors who don’t know any more than I do, would stop complaining about it. If it’s going to be used, it’s up to those who drive and work on the cars to figure out how to make it work best for them. If it’s not going to be used, then everyone should just forget about it and move on.

Post-race tech goes smoothly all season long– One of the most frustrating things as a racing reporter is to finish a race write-up only to later discover that the winner was disqualified for some sort of infraction. Please understand, I am not asking that race officials ignore violations. Instead, I am asking that there be no violations to ignore. I understand that finding a “competitive edge” is often times the difference between winning and losing. I just want those edges to be found within the rule book or at least within that book’s gray areas.

Full grandstands– Nothing matches the energy of a sporting event with full grandstands. Over the past year, I attended several races in which the seats were filled. Unfortunately, there were also some in which the there were empty seats as well. Promoters and track owners take great risks to stage racing events so if tickets aren’t sold, the costs of those promotions cannot be met which greatly reduces the chances of other races being held. Sadly, we have seen some tracks close their gates in recent years because the grandstands have not been full, so hopefully, Santa can deliver the gift of filled grandstands.

Me not getting stranded in Waterloo, Illinois– With all the races I go to, I have been quite lucky not to have any accidents or other travel-related issues along the way. But one exception occurred this past summer when I went to the World of Outlaws CASE Construction Late Model Series/DIRTcar Summer Nationals co-sanctioned races held at the I-55 Raceway in Pevely, Missouri. After watching the first of two nights of competition, I had car trouble after getting back to my hotel in Waterloo, Illinois. It eventually took three days to get repairs made so that I could get back home to Tennessee. While there was nothing wrong with that town(as a matter of fact, the people there were very helpful), I would rather not be stranded there again.

Passing for the lead– There were instances during the season, particularly in the bigger races, in which passing for the lead became very rare or even nonexistent. Perhaps this was caused simply by the fact that the leading car was just that much better than its pursuers which made it difficult to pass. But on the other hand, we often hear drivers describe how aerodynamics are playing greater and greater roles in the sport. I have had drivers tell me that running behind another car can sometimes be similar to the wake that would be encountered by a boat running closely behind another boat. Whatever the case, whether it be aero, track prep, tires or any other factor, I hope Santa has loaded the gift of more passing for the lead in his Dirt Late Model bag of goodies this year.

Appropriate number of classes at bigger shows– It used to be that when there was a regional or national touring series race within three hours or so of my home, I would plan on being there no matter the circumstances. However, I have changed that view to a degree over the past couple of years. If I look at a track’s website only to see that there will be an overabundance of classes other than the one I most want to see, I may choose to watch from afar via a streamed broadcast. It’s not that I don’t like the other classes, but in doing what I do, those divisions can cause a great deal of dead time leaving me with nothing to report. A total of six classes or more is far too many for any racing show. A total of four classes is okay provided that the show can be run in a timely manner. Preferably, two or three divisions in action is best depending on how big of a race that main class is contesting. The days of holding people hostage at a race track until after midnight are over. Tracks that do so on a regular basis won’t stay in business long.

Better cell reception at the race track– Like there being too many classes racing on the same program, a lack of cell reception at a particular track might very well keep me away. For selfish reasons, I need to be able to post to the website as well as use Twitter, Facebook, and Instagram in order to do what I do effectively. If cell reception is not great, an ample sized press box with wi-fi will do although I prefer to be closer to the action whenever possible. There really isn’t much a track can do about cell reception but providing wi-fi for the media is a nice touch. Besides, it helps to get the word out to the world about your track.

More positivity on social media– I know it is an unrealistic dream to ever believe that this would happen but having more positivity rather than complaining and name calling on social media when it comes to racing would be nice. All the negativity associated with politics has bled over into every other facet of social media. Any Facebook post or tweet about racing, movies, music, or any other form of sports ultimately devolves into some sort of politically based whine-fest in which everyone who posts has go to every length possible to prove that he or she is right. Social media has gone from something that at one time was quite fun to now something that is used as a tool to stir up anger and create division. While the number of minds changed regarding any controversial topic by a social media post remains at zero, the keyboard cowboys believe they must offer their opinions anyway.

Hot laps in daylight for photos– I am not much of a photographer but I still try to take a few pictures whenever I go to a race. For my photos to turn out any good at all, I have to be shooting in near perfect conditions which includes having sunlight during hot laps. For that reason, I hate this current standard time we are currently on because of it getting dark so early in the day. But more than for photos, hot laps should take place before the sun goes down to get the show moving along and to provide something other than packer vehicles to look at.

No shortages and lower prices for competitors– At the beginning of the 2022 season it looked as if some of the racing schedule might be put in jeopardy due to shortages of certain essentials or because of fuel prices. Every time one of those haulers has to pull up to a fuel pump, it takes a significant toll on the race team’s budget which hinders their ability to travel. And obviously, racing can not take place if teams cannot acquire, or afford to acquire, the necessary components for their cars. In particular, there were concerns at the beginning of the year over tires and whether there would be enough of them to get through the season. Hopefully Santa’s bag of goodies will allow us to leave those worries behind when the calendar flips over to 2023.