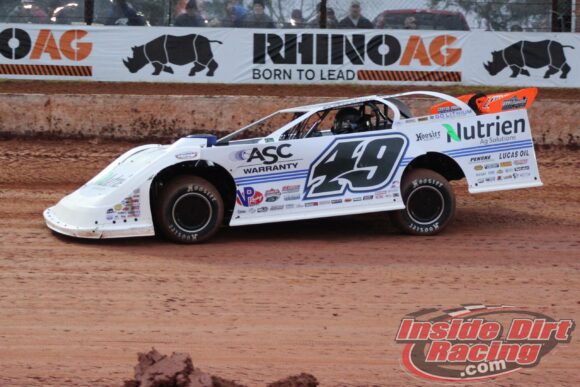 JUNCTION CITY, KENTUCKY (August 7, 2020)–The Schaeffer’s Oil Iron-Man Championship Late Model Series presented by DirtonDirt.com would kick off a twin bill of weekend racing action at Ponderosa Speedway in Junction City, KY on Friday evening with the 22nd Annual Pete Abell Memorial event and Jonathan Davenport of Blairsville, GA would lead all forty laps of the event and claim a $4,000 payday in the process.

Scott James and Jonathan Davenport would bring the field to the green flag, with Davenport jumping to the race lead, while Tanner English, James, Cameron Marlar, and Zack Dohm would give chase.

The lone caution of the event appeared on lap two for a three-car tangle involving Tommy Carlton, Glen Hounshell, Jr., and Joey Standridge, with all drivers able to continue.  Back underway, Davenport and English would quickly scoot away from the pack, with James holding down third, while sixth place running Jacob Hawkins would take fifth Dohm on lap four and fourth from Marlar on lap five, while Dohm would drive by Marlar for fifth on lap seven.

Meanwhile, Davenport and English continued to pull away from the field, with Davenport starting the process of working slower traffic on lap ten, allowing English to close in on the leader and English would actually pull alongside Davenport on a pair of occasions and the duo maneuvered in and out of traffic.

By the halfway mark, James was starting to reel in the front pair ever so slightly, while 12th place starting Michael Chilton had rim-rode his way around the top of the track to charge to sixth.  By lap thirty, Davenport was slowly pulling away from English with the lead, while James began showing signs of smoke and would exit the event with four laps remaining.

Davenport would go unchallenged the remainder of the way to score the victory, with English claiming second and Hawkins finishing in third.  Dohm and Chilton would complete the top five finishers.  The remainder of the top ten finishers for the event would be Marlar, Kody Evans, Ryan King, Justin Rattliff, and Hounshell, Jr.

The Schaeffer’s Oil Iron-Man Championship Late Model Series presented by DirtonDirt.com next event will be Saturday August 8 at Smoky Mountain Speedway in Maryville, TN for the 16th Annual Iron-Man Classic, paying $5,000 to win.