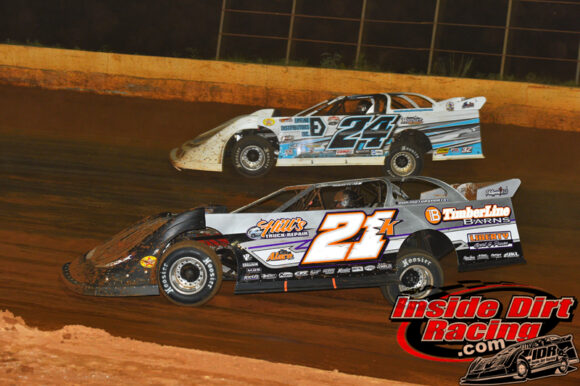 2020 has been a nightmare in so many aspects that it’s almost unimaginable to even count those ways. And further, to compare racing with many of the other things to have taken place this year seems somewhat frivolous. That being said, however, every racing series on the planet from Formula 1 to NASCAR to Dirt Late Models has been severely impacted in this coronavirus-disrupted season. But perhaps it has been the regional Dirt Late Model tours around the southeastern corner of the United States and the rest of the country who have faced the most difficult of challenges.

The problem for Dirt Late Model regional series is that many of them were left to pick up the scraps after the two national tours realigned their schedules with the limited number of tracks that were allowed by their states to reopen as the worst of the pandemic appeared to subside during the summer months. Given a choice from among multiple tours needing venues on which to race, many track owners and promoters opted to allow either the World of Outlaws Morton Buildings Late Model Series or the Lucas Oil Late Model Dirt Series compete on their clay.

With some purses being altered, hosting one of the national circuits became a bit more affordable for some. And, of course, the bigger stars on those tours almost certainly guarantee large crowds which means greater revenue opportunities for the tracks.

With the decreased number of race dates available following several weeks of shutdowns, it is difficult to blame the tracks for those decisions. Still, that left some regional series in a bit of a bind considering that they have sponsors and regular competitors who were hoping for a full season.

This weekend, one of those series disrupted by this strange and frustrating season will conclude its 2020 campaign at Smoky Mountain Speedway. The Southern All Stars Dirt Racing Series will sanction a $3,000-to-win event for Super Late Model machines at the Maryville, Tenn. facility on Friday night followed by a $7,000-to-win affair on Saturday evening.

During the course of the year, the Southern All Stars had 22 races that were either postponed, reset for another date, or cancelled altogether. Some of those changes were caused by the shutdowns, some by weather, some by the financial circumstances at particular tracks, or some by being rooted out of the way for another event.

And the SAS was not the only one to suffer multiple departures from the originally planned schedule. The Spring Nationals were completely shelved, Carolina Clash had nine races changed, Iron-Man had eight races impacted in one way or another, and the Ultimate Series has had 24 races to be altered.

Some of these changes were brought on directly by the pandemic and some were caused by the after effects that came later. And, of course, the usual number were taken out or postponed by weather-related issues.

It is doubtful that anyone who is involved with any racing series in the world would consider any other season in racing history to be more difficult than this one. But in particular, the regional series such as the Southern All Stars have felt the brunt of 2020 perhaps more than the others.